It may not shock you to know that the sugar industry does not have our best interests in mind. But would you be alarmed to discover that they have knowingly manipulated science in order to increase sugar consumption? And that they did in the face of scientific evidence that sugar consumption was associated with chronic disease?

Next year will mark 50 years since the sugar industry launched and funded a literature review exonerating sugar from its association with chronic heart disease, without disclosing the industry’s role in the study.

What we now know as the Sugar Association began as the Sugar Research Foundation (SRF) in 1943. Researchers Cristin Kearns, Laura Schmidt, and Stanton Glantz of the University of California, San Francisco (UCSF) spent combed through hundreds of SRF documents and found evidence that the sugar industry had manipulated science to exonerate sugar as the dominant cause of heart disease – an action that changed the direction of scientific research for decades. 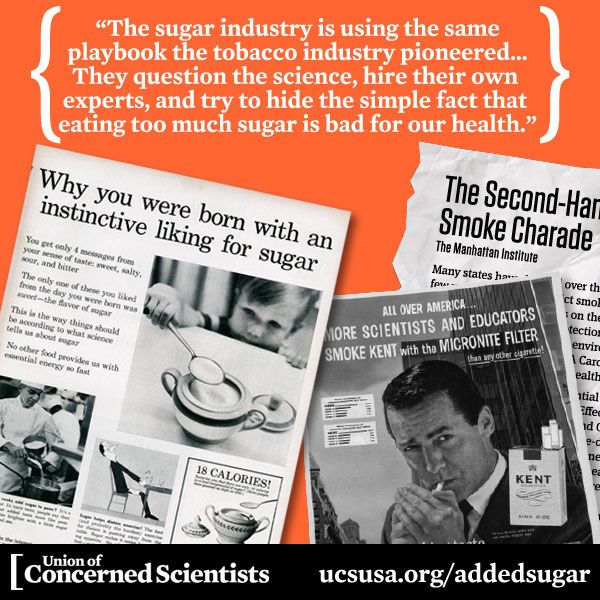 A particularly shocking quote they found was from President Henry Hass’ 1954 speech to the American Society of Sugar Beet Technologists in which he said, “If the carbohydrate industries were to claw back that 20% (the difference between the 40 percent fat has and the 20 percent it should have) and if sugar maintained its current share of the carbohydrate market, this change would mean an increase in per capita sugar consumption of more by a third with considerable improvement in general health.”

The sugar industry was interested in increasing sugar consumption by funding science that would urge Americans to cut calories from saturated fat and hopefully replace it with sugar.

The UCSF analysis reveals that the SRF used the following tactics that the Union of Concerned Scientists previously identified in Added sugar, subtracted science to undermine public health policy on sugar. Our work shows that SRF’s successor, the Sugar Association, and its counterpart in the corn syrup industry, the Corn Refiners Association, took hints from SRF:

Just as the Corn Refiners Association planned to “bury the data” when it was impractical, when the sugar industry learned that researchers like John Yudkin of Queen Elizabeth College were questioning the maxim that the calories in sugar were more desirable than calories from fat, the SRF’s vice president and director of research called on the organization in 1964 to “embark on a major program ‘to counter the science coming from Yudkin and other representatives’ negative attitudes towards sugar”.

This program would include conducting a public opinion poll to find out what messages would resonate with consumers and policy makers, opening a venue to publicly call out scientists for their undesirable sugar findings, and finally, disseminating studies funded by the sugar industry that examine the causes of chronic heart disease.

Similar to the sugar industry’s recent misinformation to combat labeling policies, as part of its campaign to increase sugar consumption in the 1960s, it began funding its own review of the literature on sugars, fats and chronic heart disease in an obvious attempt to dispel rumors that calories from sugar were at least part of the problem. The SRF paid Dr. Mark Hegsted and Dr. Robert McGandy, under the supervision of Fredrick Stare of Harvard University, a total of almost $50,000 (in 2015 dollars) for their work. And the SRF has been heavily involved throughout the review process, urging scientists to focus on the dangers of eating fat.

SRF Vice President and Director of Research, John Hickson, pointed out in 1965: “Our special interest was in that part of nutrition in which carbohydrates in the form of sucrose are claimed to make an inordinate contribution to the state metabolic, hitherto attributed to aberrations called fat metabolism. I will be disappointed if this aspect is drowned in a cascade of examinations and general interpretations.

The study authors dismissed research showing the impact of sugar on chronic heart disease in several ways, focusing particularly on possible biases within individual studies instead of examining consensus across studies. The conclusion of the literature review was that there was “no doubt” that the only way to prevent chronic heart disease was to reduce dietary cholesterol and replace saturated fat with unsaturated fat. And the SRF was content with these findings, telling the lead authors, “that’s exactly what we had in mind.”

Just as the Sugar Association and the Corn Refiners Association work with academic scientists today to advance their talking points, when the literature review was published in the New England Journal of Medicine in 1967, the authors did not not disclosed funding or close SRF involvement in the article. Dr. Fredrick Stare, founder and chairman of the nutrition department at the Harvard School of Public Health, had a long history of funding the sugar and food industry: more than 30 articles written by members of his department have were funded by the SRF just between 1952 and 1956. Stare’s department at Harvard is a key example of how industry funding can influence academic science, with dangerous consequences for public discourse and public policy.

The manipulation of science does not happen in a vacuum. Often it also serves to change the conversation and influence policy. Similar to current sugar industry efforts to undermine public health policies, in 1986 the United States Food and Drug Administration (FDA) Task Force on Sugars assessed the scientific evidence regarding sugar, in drawing heavily on the 1976 industry review, titled “Sugar in the Man’s Diet.” The FDA report stated that “no conclusive evidence on sugars demonstrates harm to the general public when sugars are consumed at current levels.” The agency study was influenced by industry sponsorship, as the study chair later worked at the Corn Refiners Association, a trade group that represents the interests of manufacturers of high-potency corn syrup. in fructose.

This agency study, which had a clear influence on the sugar and food industry, was responsible for determining the GRAS status for several added sugars, and largely set a precedent for years of drug denial. health effects of high sugar diets. .

It’s no wonder that even today our food policies are just beginning to adequately address the association between added sugars and chronic disease. The sugar industry has done a great job of postponing the inevitable awareness of the dangers of excessive sugar consumption for half a century. And they still employ this same behavior. Just last month, the American Heart Association released additional sugar intake guidelines for children, recommending that children under the age of two do not consume added sugars and that all other children consume less. 10% of calories from sugars, because “there is little room for nutrient-free products”. calories in the usual diet of very young children. The Sugar Association responded by accusing the American Heart Association of lacking scientific integrity.

Fortunately, the tide is starting to turn despite the industry’s best efforts. The FDA label will soon include information about added sugars on food packaging. More and more local resolutions are popping up to tax sugary drinks. School meal policies add variety and improve the nutritional quality of children’s diets. And talks like this reveal the truth about how the food industry has manipulated science to make our diets worse.

Yet the aforementioned research points to some interesting scientific integrity issues that remain today, including the stringency of conflict-of-interest policies in scientific journals and ethical issues related to the ability of decision makers to use publicly funded research. industry to shape policy. My colleague, Gretchen Goldman, explains in more detail how we should deal with conflicts of interest in science funding here. We need greater transparency around the role of the sugar industry in scientific studies, including funding but also identifying the nature of the relationship between industry and science. Independent science should inform policies that protect public health from the harmful effects of added sugar.

Genna Reed is a science and policy analyst at the Center for Science and Democracy at the Union of Concerned Scientists.