President Yoweri Museveni has assured Ugandans that there is still plenty of excess electricity to be consumed in many strategic areas for investment, especially industrialization.

The president said current excess electricity, including solar power, can be upgraded and used to pump water for irrigation for agricultural production when rains are unsustainable.

“The owners of the Sarrai group focus on innovation in investment. They gave me the idea that excess electricity can be used at the cost of three cents and pumped water from water tanks for irrigation at night and turned off in the morning. I will take it back. The idea of ​​irrigation is a wonderful idea for agricultural production,” the president said.

The president commissioned a new sugar refinery on Saturday, Kiryandongo Crest Sugar. The factory, which is located in Kimogora A Village, Kakwonkwo Parish, Mutunda Sub-County, Kibanda North Constituency, Kiryandongo District, covers 13,000 acres of land and has started cane plantation in sugar in 2018. It currently has a maximum processed sugar capacity of 4,000 tons per day. and employs about 5,000 people and plans to employ up to 8,000 workers as production increases in the future. The sweet product is marked ‘Kiryandongo Crest sugar’ for sweet satisfaction.

Speaking at the inauguration ceremony in the presence of cabinet ministers; Hon. Matia Kasaija, Minister of Finance, Planning and Economic Development, Hon. David Bahati, Minister of State for Trade, Hon. Jennifer Namuyangu, Minister of State for Bunyoro Affairs, MPs from the region, Bunyoro Kingdom Prime Minister Andrew Kirungi Byakutaga Omucwezi among others, the President assured the nation that the government would continue to support the policy of industrialization of the country.

“We want to support industries because they are developing other areas like road infrastructure,” he said, adding, “that government programs like Parish Development Model, Emwoga…the money that is given to them injected comes from investors’ taxes and income paid to the government,” he said. mentioned. 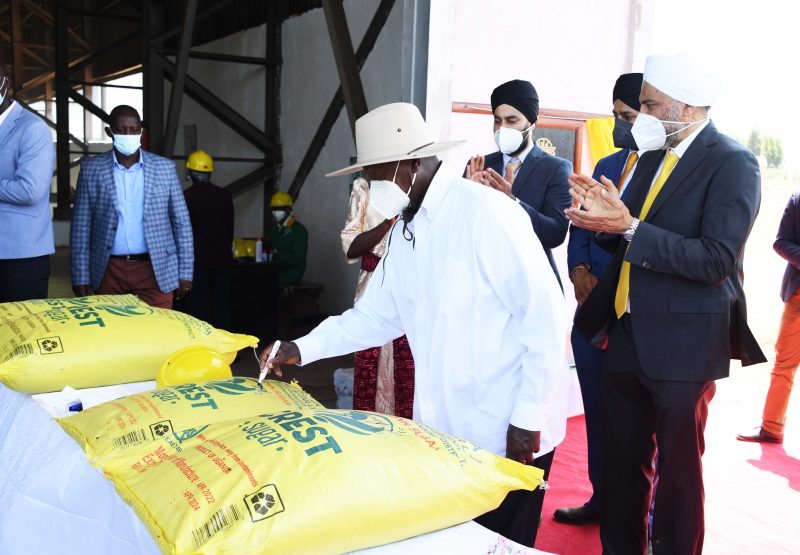 Mr. Museveni observed that development is like a chain link. “The industries provide jobs for citizens who then have access to cash for family economic empowerment; The transportation system allows the government to collect taxes on fuel consumption. The heart of the development has also happened here in Kiryandongo and in the base region of Mutunda,” he said.

The president also told them that the government will coordinate the program to connect electricity to the region, build a start-up school and a health center for the growing population to access services.

He instructed the Prime Minister of the Bunyoro Kingdom, Andrew Kirungi Byakutanga, to continue to unite the people of greater Bunyoro, the region home to many tribes.

He thanked the people of Kiryandongo for their support for development. “This sugar factory will promote the further development of the region. I congratulate people in the region and across Uganda on this important milestone,” he said.

Trade, Industry and Cooperatives Minister Francis Mwebesa hailed the President’s initiative to market local sugar as a commodity in other countries including Tanzania and Turkey.

Mwebesa said the commissioning of another sugar mill was another important historic event for the country, calling on investors to work closely with local people and the district administration to protect and promote the investment.

Chairman of Kiryandongo Sugar Factory, Sarbjit Singh Rai/Sarrai Group, hailed the government’s support for the establishment of a factory in addition to the number of existing factories in the country.

“The management of the factory thanks the government for having supported the investment and for having made it a reality favoring the industrialization of the country. The total amount of funds invested in the investment is 60 million US dollars,” he said.

President Sarbjit Singh further informed the President that the company has trained about 150 local farmers in the most practiced techniques to get higher yield from sugarcane cultivation.

Bunyoro Kingdom, government officials as well as the general population of the region observed that the factory was built in an area that was once a forest in a commercial project with infrastructure development.

Philippines warns of sugar shortages due to low production – Markets