The News Five team traveled south to Big Creek Port, where American Sugar Refinery/Belize Sugar Industry officially launched its improved raw sugar and molasses logistics to the port. This is a multi-million dollar investment that reduces the export loading rate of these products. This is part of the miller’s transformational investments for a sustainable future. News Five’s Duane Moody reports.

It was a proud and historic moment for sugar industry stakeholders as ASR/BSI worked overtime to see a thirty million dollar investment made at the Big Creek port in Independence where the sugar is stored and mechanically loaded onto ships in deep water. 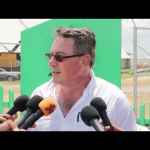 “The owners of Big Creek Port have made the decision to dredge this port at eleven meters depth and this allows vessels much larger than those which could heretofore to come in to load at the quay here. This depth of eleven meters allows ships like the one you are seeing this morning, which is a bulk carrier of thirty thousand tonnes, to come to the quay and to load at the quay. And I just want to point out that it’s a piece of history in Belize. It is the first time that a ship of this size has come to dock and load raw materials such as sugar from the quay itself.

Since 2017, ASR/BSI has moved its activities from the port of Belize to the south. It was a bold move, but one she says is now paying off. With this multimillion-dollar investment, it cuts raw sugar loading time from six weeks to five days and allows thirty thousand tons of raw sugar to be shipped at any given time.

“The way raw sugar is traded around the world goes against a world price; we call it New York’s number eleven price, it’s the raw sugar price and it’s a negotiated price, so it’s there all the time. But this price is based on the fact that you can load at least four thousand tons of sugar per day. Now in the past we couldn’t achieve this so for every ton of sugar we sold, there was a discount based on how long it took to load that sugar. We have just today, well yesterday when the loading started, overcoming this bottleneck and barrier.

About one hundred and forty thousand tons of raw sugar are produced annually at Tower Hill. With thirty tons per shipment, at nineteen cents US per pound, that translates to over twelve point five million US dollars. Supply Chain Manager Eldy Smith explains the new facilities and the efficiency of the mechanical processes on site. 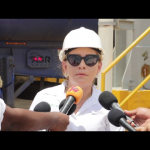 “We used to load, say, five hundred tons of sugar a day. We are not looking at between five and seven thousand tons per day, which represents a major saving for the whole industry. The facility itself is a major warehousing facility and a molasses storage facility. There’s everything to go with it, the conveyor systems and everything, and a large fleet of vehicles to get the sugar and molasses from the tower hill to this facility to allow loading. And, of course, a state-of-the-art conveyor system for loading into the ship that is portable – you can move it up and down the length of the ship.

Other benefits of the investment include employment opportunities for Stann Creek West and environmental concerns surrounding the tug and barge system it replaces. 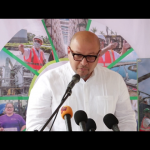 “Today’s launch also marks the end of the decade-old tug and barge system that was previously used in the sugar industry – a system that was plagued with several challenges, including environmental concerns. But all of this does not would not be possible if the owners and managers of Big Creek Port did not have the foresight and ambition to create Belize’s first deep-water port, which allowed ASR/BSI to revamp its existing logistics operations. 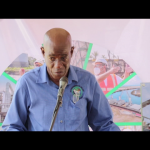 “Even though some jobs have been lost in Belize City, we are looking at interest from farmers and even BSI, so hopefully at the end of the day there should be benefits for farmers as this thing drags on. and that they will realize that it was a very good investment for the sugar industry.